I finished listening to the audio transcript of the Supreme Court. I hope that I am completely wrong but fear I am not. It may not go well for gays regarding California's Proposition 8. I wrote previously that the Ninth Circuit court wrote their opinion to discourage the Supreme Court from taking the case. I am pretty sure the Supreme Court wished it hadn't taken the case now. They are in a no win situation and the Court is clearly frustrated.

There will be four members of the Court that support rights for gays. They believe there is no rational bases for discriminating against gays under any circumstances. There are two members that do not believe in the 14th Amendment's equal protection clause and will never find a reason to apply the law regardless of the case. Sometimes I wonder if they only attend the hearings to badger the attorneys for sport. Then there are two judges that rather they did not have to decide the case. They will say that Proposition 8 is constitutional having nothing to do with gay or marriage rights. They simply dislike the idea of a law not be defending by the government creating a governmental veto over initiatives brought by the people.

This means the case is tied 4 to 4 with one judge deciding. I am not sure who will be the deciding vote but they have an out. There will be untold legal repercussions throughout the country if he agrees with the Ninth Circuit court and throws out Proposition 8 as unconstitutional.  If he upholds Proposition 8 gay marriage will be banned in California for now. No change will happen in the country which just dodged a bullet of legal chaos. Eventually the ban will be overturned by the people of California in 5 to 10 years, so there will be no harm and no foul. With 60% of the people supporting gay marriage, the deciding judge can duck his responsibility to protect minorities and let it play out at a later date.

I think they are going to have a tougher battle in the Federal DOMA case. At least two of the five judges that may vote in favor of Proposition 8 are staunch states rights advocates.They do not support federal laws that negate state laws. What are they going to do if they also want to decide gays do not have rights? If they strike down DOMA then in this case, or another case very soon, they will have to decide equal protection for marriage across state lines, Six to seven judges will not like some marriages being legal and others not.  This creates a different kind of legal chaos. Our country is based on the idea marriages are enforceable across state lines.

There is but one choice ahead of them - move the country forward. I am sure they are thinking this was a mistake and looking for any way just to maintain status quo.

Yesterday my two dogs and I were attacked by a neighbor's dog - a vizsla. Every week, Mandy and Toby follow me outside when I put the garbage on the street for collection. It is their one regular chance to explore the front yard otherwise they are restricted to their own area in the back of the house. Our house is on a large lot isolated from our neighbors. I was walking down the long driveway when I heard barking and turned around to see the neighbor dog leap over the fence attacking Toby and Mandy. Toby was too fast and sadly Mandy was too slow. The vizsla had Mandy in its jaws. I put myself between the vizsla and our dogs using a waste bin as a shield. For some time, the vizsla and I squared off with me keeping myself between him and our dogs yelling to get him to leave. Eventually, the owner came out and with some effort called off the dog.

Mandy was scared but I did not see any cuts or bleeding. Coincidentally after putting out the garbage, I was on my way to the veterinary to have Mandy's teeth cleaned. So less than 20 minutes later, Mandy and I were at the veterinary clinic. Mandy started shaking badly while waiting for the doctor. The doctor check Mandy over. Mandy was in shock with her heart racing. We found bad bruises along her neck. Searching further through her long coat, we found a deep puncture wound that was starting to bleed. The puncture went deep into her skin down to the bone. I left Mandy to have the wound patched only to learn a little later that there was more than one wound and it was much more serious. Although the puncture was one inch wide, the damage under the skin went across her whole back. Large areas of tissue became separated and was in the processing of dying. The doctor cut the skin back until she found intact skin. I wouldn't have left her had I known it was so bad.

She is home now and is recovering although she looks a bit like Frankenstein's monster across her back. Mandy has stitches that goes from one side to the other. It looks like a magician tried to saw in her half. The pictures are too grotesque to post.

I reported the incident to Animal Control after leaving Mandy at the clinic. They asked me if I wanted to press charges. They explained that since I was not physically hurt and the breed is not dangerous, they would only issue a citation if I pressed charges. They told me the dog would not be impounded but the owner would have to answer to the charges of a loose dog, property damage (Mandy's injuries) and pay a fine. If the owner was cited two more times they could no longer own a dog. I did not want the dog impounded but wanted an official record because the dog easily jumps the fence. By filing charges, I am thinking the owner will take the incident serious and find a way to keep the dog within its yard. It seemed like the citation was the proper step. The officer took my statement, called the vets to get a report and then later visited Mandy in the clinic to get pictures.

The owner visited me last night. The dog was surrendered to Animal Control and put down.

I see the empty yard when I come home. I then see Mandy and Toby waiting at the top of the stairs. I love them and they are members of my family. Now, I think about the family next door who lost their loved one. I am not sure how to reconcile the feelings.

Update...I have since learned that it was the owner's decision to surrender the dog. Animal Control did not require the dog to be taken just as they told me. This should change how I think about the situation but it doesn't.

The NRA has no comment and stated it is not appropriate in the memory of the children gunned down that nobody else discuss why we have so many guns and what can be done to prevent any more deaths. One wonders about the mental state of the NRA, its management and its members.

In other news, Busmaster announced its pride in the performance and quality of its product. 20 kids, no misfires no survivors.

Guns don’t kill people. Gun manufatures and the NRA does.

There is no camera or lens that can truly capture the breathtaking experience of the Albuquerque Balloon Fiesta. A camera can capture only just a tiny fraction of the balloons flying overhead. So, when you see what looks like 50 or 100 balloons in a picture there really is another 500 to 600 all around you. Unlike most festivals, the Fiesta allows spectators to walk among the balloons during inflation and flight which just adds to the awesomeness.

The last few pictures is race day when there are far fewer balloons flying. The second to last picture is of a green, yellow and blue egg shape racer balloon that won the competition for the day. A thirteen year-old son and his dad flew from more than two miles away and dropped a beanbag in the target's dead center. I understand the kid is nearly as good as his dad - so he claims. BTW, this was the second kid in the flying competition for the day. 11 year old Bobby Bradley was also flying with his dad Troy. Bobby soloed at the age of nine and is an accomplished balloonist in his own right. Bobby is in one of the blue and white egg shape balloons (not sure which one - three are identical). I met Bobby last year at the national convention. He was just another pilot...but who just also happens to be 4' foot tall (at the time). 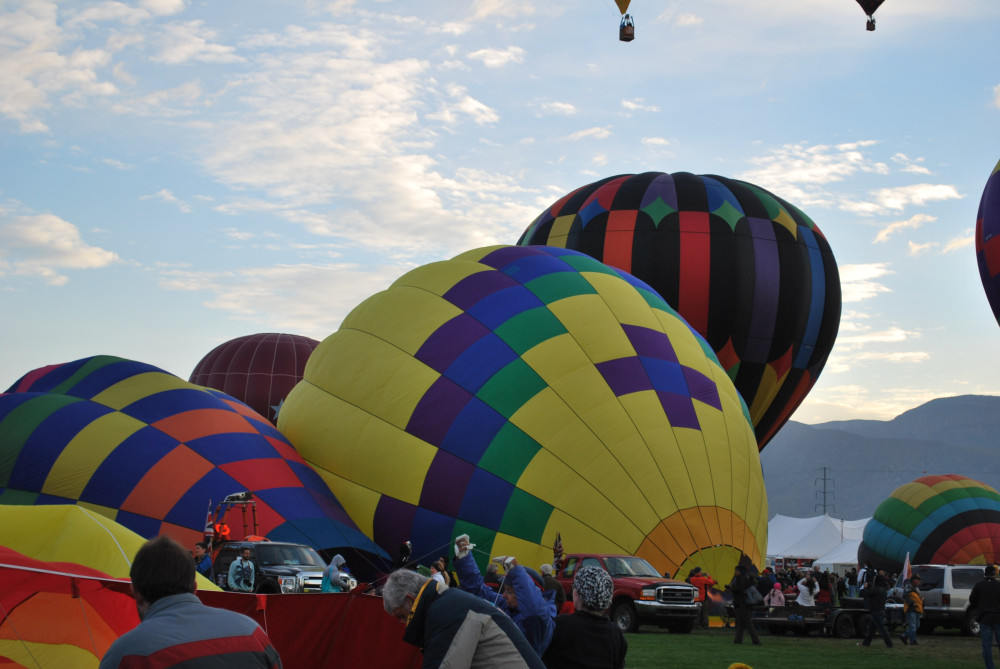 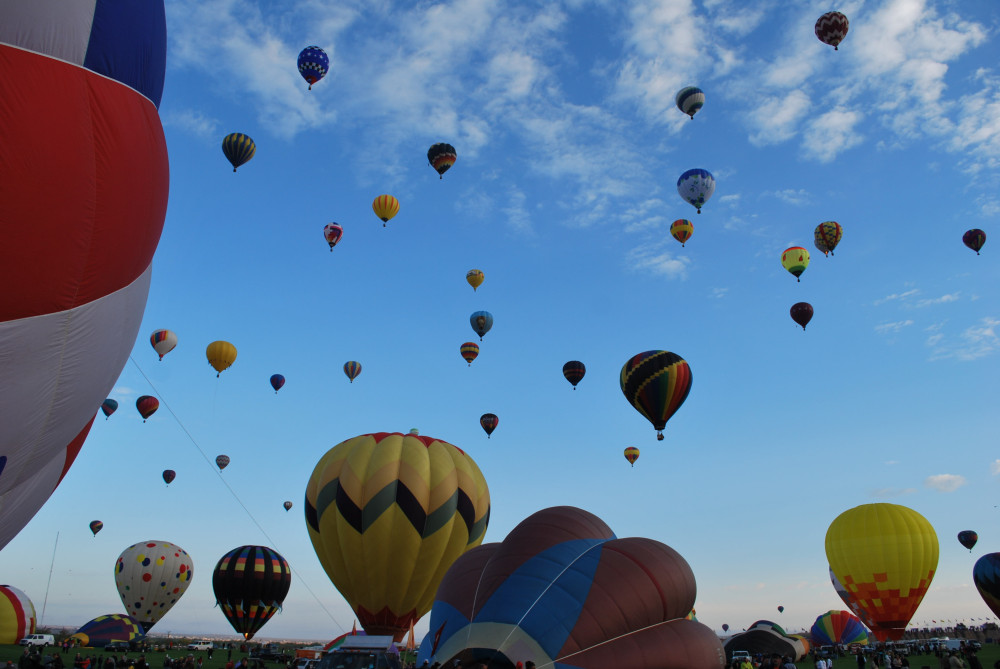 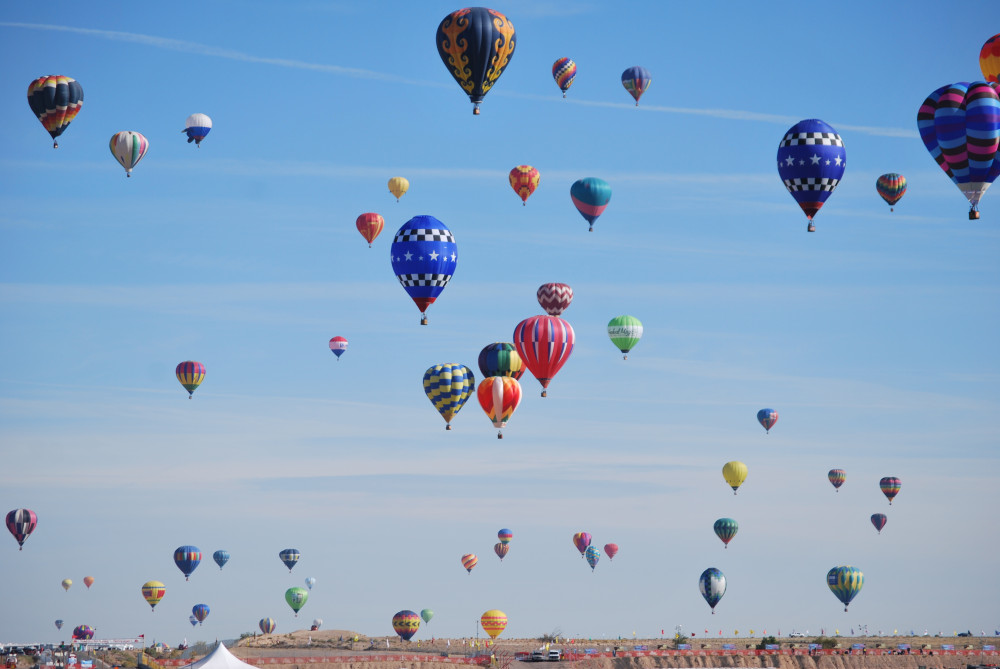 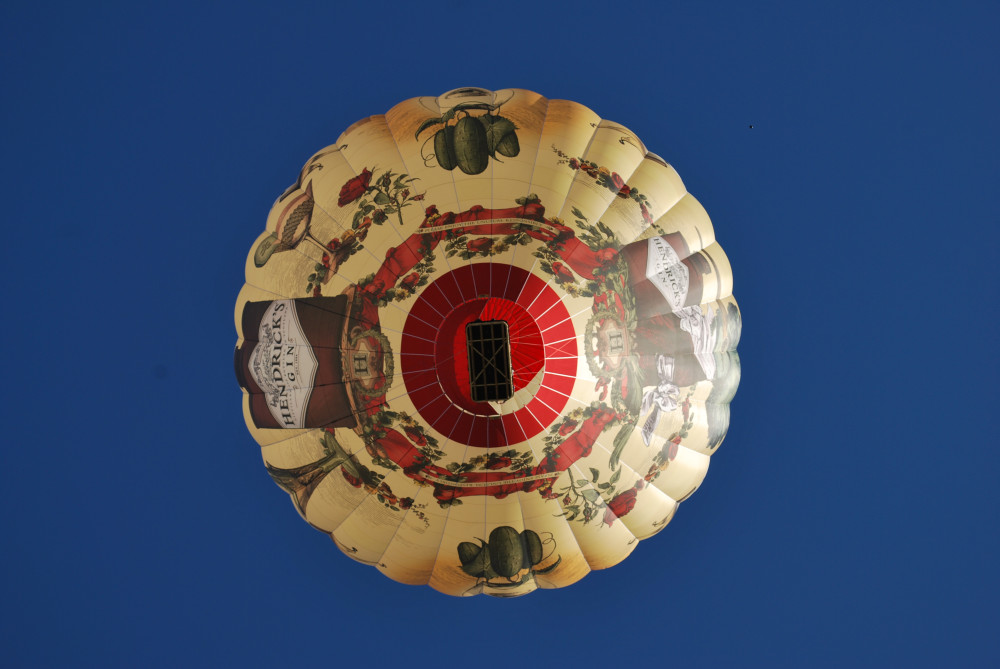 I got the opportunity to receive some education today on what a high wind balloon launch can do at a balloon rally in Nebraska this morning. No - the balloon is still not inflating in the In the first picture. It is completely inflated. The wind caved the side of the balloon because the balloon is still tied to the trailer. The next photo shows the balloon starting to lift the trailer. My pocket camera was not fast enough. The balloon lifted the 2,000 lb trailer some 6 feet off the ground before flipping it over separating it from the truck. You can see the trailer on its side in the third photo.

I understand the tie-down stuck and would not release from the balloon creating this situation. Nobody was hurt and surprising very little or no damage to the trailer. Three bodies and counting courtesy of the NRA. The NRA's gun toting campaigns reinforces and perpetrates the idea that everybody is a threat so there is nothing wrong in killing anybody. This mentality that underpins United States’ psyche isn’t seen much in western civilization any more. Most cultures seem to be growing out of the need make a point by killing. It is still prevalent in the Middle East, so are we any better than those we sit in judgment of?

Have you noticed that with every public gunning the NRA lackeys immediately state that the situation is isolated and no cause for reconsideration of gun laws by implying the person would have killed the people anyways maybe with a knife or something else?

NRA only speaks out with hollow and empty condolences after the bodies are on the floor but continues vehemently supports the rights of anybody to pull a trigger before the fact. The loss of life and loved ones is of no concern to the members of the NRA.

It is a really messed up when a society values Glocks over family.

Yet another mass shooting supported by the NRA and its political ternary that keeps 300+ million guns on the streets without so much as a discussion by the people America voted to keep us safe. My thanks go the NRA and all its members. For the rest of us, remember we all get one vote, but only the NRA's vote counts.

Another mass murder brought to you by your local your gun lobby where guns don’t kill people.

In a sea of green on stands alone. I received a private tour of Churchill Downs. There are over 50,000 seats in Churchill Downs and this one caught my attention. Quoted by Jay Lake - what could be better.
Collapse